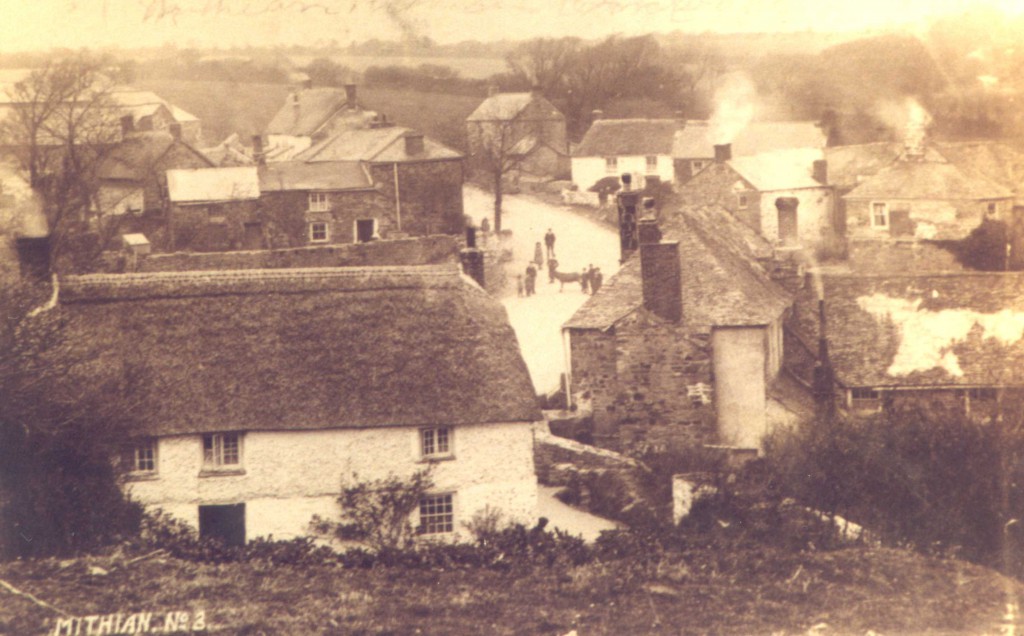 In Cornish Place Names O J Padel states that Mithian is, “A completely obscure name. It looks Cornish rather than English and is clearly an ancient name; but no Cornish, Welsh or Breton word are known that could explain it.”

The Cornwall Council Monuments’ Records say that, “The settlement of Mithian is first recorded in 1201. The name is Cornish but its true meaning is obscure.

J E Glover, in his book, The Place Names of Cornwall, suggests that Mithian is named after a stream containing a derivative of a word related to the Welsh midd, an enclosed place or pit, which is a pit or pool in a river.

There is then, no firm evidence or opinion as to the origin of the name but what of the spelling? Although we now know it as Mithian it has previously been spelt as Mithien, Mydyan, Midhyan, Mithyan, Medyan, Methean and Methyan so you can take your choice. Whatever the spelling, the name refers to the lovely hamlet situated about a quarter of a mile inland from the Perranporth/St Agnes road. It is well signposted and you are welcome to visit it, hopefully for its own sake and not as a short cut to wherever.

St Agnes and Perranporth were once a part of the Manor of Tywarnhayle, or Tiwarthel as it is written in the Doomsday Book, and assuming that the village of Mithian existed at that time then it too was a part of that manor. Prior to 1066 Algar held Tywarnhayle but following defeat by the Normans it was re-allocated to the Count of Mortain, a half-brother of King William. Tywarnhayle is Chy war an hayl in Kernewek (Cornish language) and translates into English as, “house on an estuary.” We have been unable to determine when Mithian Manor was established but there is an early reference to it being occupied by a French nobleman who may well have had some connection with the Count.

Goshen is an area to the south east of the centre of the village and it is possible that its name comes from the bible. The name refers to that place where the Israelites lived when they were held in slavery in Egypt. Jericho valley is nearby and leads down to Trevellas cove: here again the name has a biblical connection.

An entry in the Gazetteer of Cornwall in 1884 states that it is, “An ecclesiastical parish formed in 1846 from the parishes of St Agnes, Kea, Kenwyn and Chacewater. It is described as, “A village containing a Wesleyan Chapel, an Inn and about 20 houses.” It still has the Inn and the village has grown only a little but the chapel has now been converted into dwellings.

The village spans the boundary of the civil parishes of St Agnes and Perranzabuloe and the dividing line is thought to be more or less in line with Celtic times, before they were joined under Norman rule. This division is marked by Mithian River which has occasionally overflowed its banks and flooded the lower part of the village.

The largest and most populated part of the village lies to the west of the river and up until the early 1900s Mithian Manor owned all of it. This is markedly different from today when the freeholds are mostly held by individuals. To the east of the river the Vyvyans were the landowners and this included the beautiful house, Rose-in-Vale.

Mithian is a delightful little village with an excellent community spirit, it is much-photographed and endears itself to all who visit or make it their home.